ARC Engineering working the the TV Academy and Gensler recently completed the Saban Media Center which has the Wolf Theater a 600 Seat state of the art theater with Dolby Atmos speaker system and Laser projection.
See pictures from the star laden opening event here: 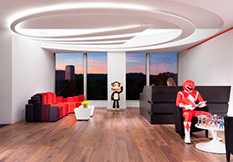 has the link below embedded in it.